Stranded on the side of the road

Last week I was shooting in Virginia Beach, Virginia for an engineering client. One of the shots in the brief was a night time long exposure image of a bridge that my client designed. I found a spot where I could park my 4Runner safety, making sure I put on my four-way blinkers and plugging in my roof top mounted safety LED lights.

Unfortunately, I ran the 4Runner battery down so low that it would not start up. So, I called AAA and waited. I popped the hood and walked around a bit to stay warm.

All of the sudden a red Chevy Spark jumped the curb and came to a stop near my truck. A gentleman wearing a green safety vest got out and said “what’s the problem.” I told him about the battery being run down (operator error) and he said ok.

He reached into to his little car, which was filled to the brim with all sorts of safety gear, pulled out this smallish device with cable connectors on it and hooked it up to my battery. He said, “start her up.” Just then, my phone rang and it was AAA saying they were on the way, I was a bit perplexed by the call, because I thought the person helping me was from AAA.

Anyway, I told the guy on the phone from AAA that help was there, which left him confused. He thought maybe that AAA had double-dispatched a tow-truck to help me. I thanked him and hung up.

The truck started up straight away. I asked the gentleman who stopped to help me if was from AAA. He said no, he saw me on the side of the road and liked to help people. He would not accept payment. I thanked him and asked him about the jump starter box. He said they were fairly inexpensive and you could buy them from Amazon.com.

Which I did. I try to buy local if possible. There is an AutoZone near my house and I stopped by there to look at the different brands of starters. Unfortunately, they only carried the heavy-duty chargers for big block and diesel engines. Next up was Advance Auto Parts via their web site, they were out of stock. I also tried to NOCO web site, but to make a purchase you need to set-up an account – there was no guest check-out option. So, off I went to Amazon to purchase the NOCO GB40 jump starter.

These units charge via a USC-C cable and they also include a cigarette lighter USB adapter for charging while driving. There is also a flashlight included within the jump starter and a USC-C out plug for charging your phone or ipad/tablet.

It arrived two days ago. I used it to help a friend out this morning. I drove past his house and saw his grand-kids trying to maneuver a Honda Odyssey alongside his car so they could use the jumper cables.

I stopped, said hello and watched. (He was trying to teach his grand sons how to connect the cables for a jump start – which he needed – because his battery was depleted) After a couple of tries with the mini-van, I mentioned that I had this jump box starter.

He showed his grandson how to attach red to red, black to black and after the connection was made, the device was turned on. My friend got into his car, cranked the starter and it fired up on the first try. His battery must have failed after three nights of temperatures hovering in the low teens.

So, as far as I am concerned, this little device paid for itself within the first week of ownership.

I plan to keep mine charged up and in my vehicle. (you can charge it via USB or via the cigarette lighter in your vehicle).

Sure beats standing on the side of the road waiting for AAA (or CAA for the folks up north). 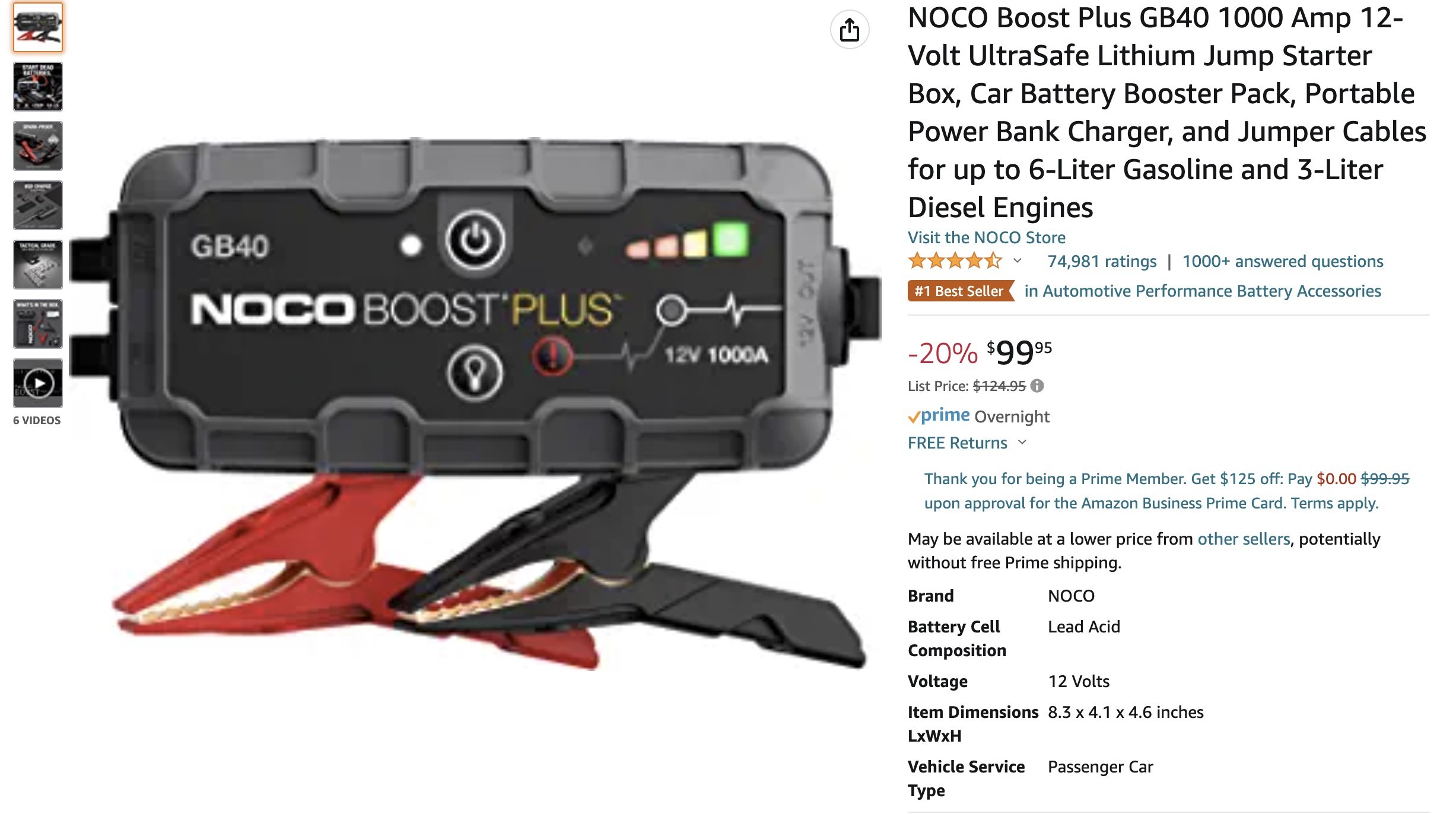